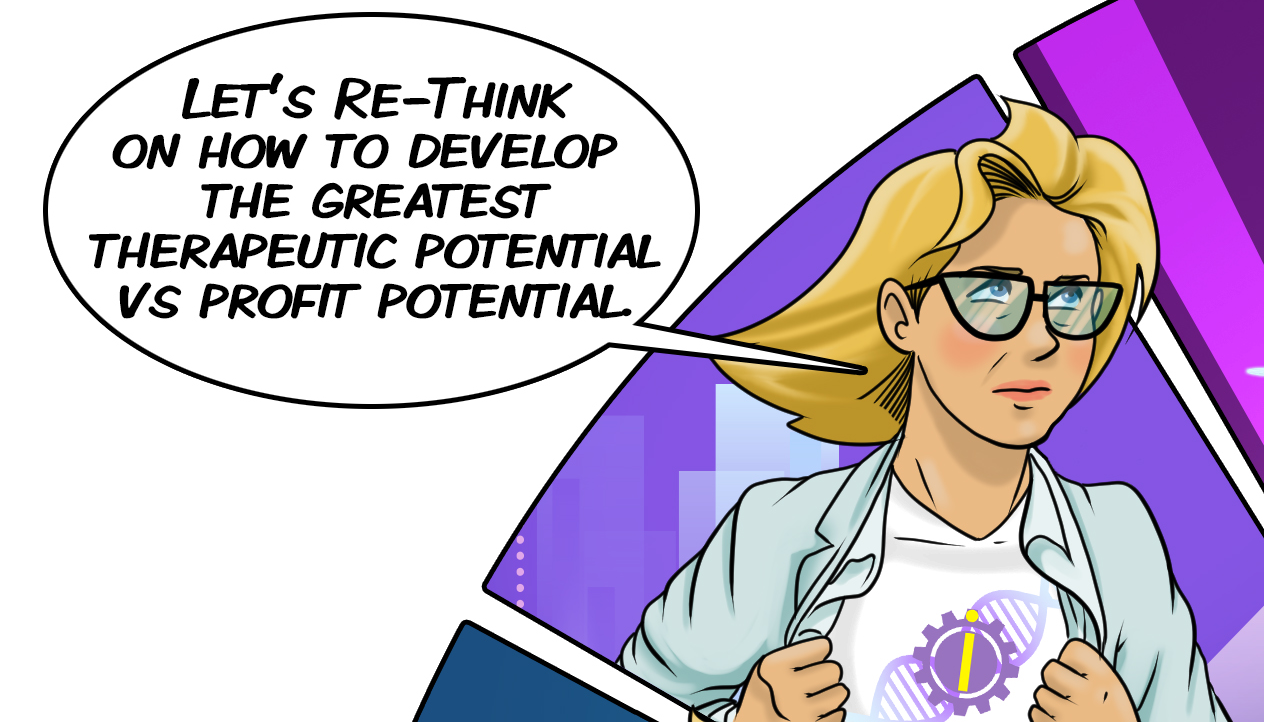 Barbara Handelin of Audacity Therapeutics is on an important mission to change the way in which funds can be raised for drug development and/or repurposing to meet the needs of the 90 per cent of us who have a condition with no effective treatment. She and her team’s work may likely change an industry.

What I am talking about here is a change from focusing on headline-grabbing “blockbusters” engineered by Wall Street/Pharma,  to instead developing products to treat any disease based on huge medical impact vs market value.  ( much less profitable…but, nonetheless much needed.)

Given she is a woman with a Ph.D. with significant credentials as a pioneer in her field, is it proper to portray her in a cartoon? To place her important work and mission into a mini graphic-novel? A piece of art that appears as a circular mandala exhorting in an almost spiritual way why change is needed in the business model in her industry?

If for one reason alone, the ability of a cartoon to get complex messages across in a visual fashion that is simple, colorful and impactful is undisputed. Otherwise, consider the near-impossibility of rendering 40 years of professional and industry experience and scholarly writings into a medium that doesn’t require its audience to have an advanced degree. But, to still come away educated and appreciative.

As any schoolteacher can attest to, the interest generated by a cartoon in its reader can often lead that person into a deeper dive and more traditional way in which to get educated and then take action on that learning.

So, take a tour of Barbara’s professional life and see if you can identify with the purpose and importance of her mission.  You do? You can reach her directly at This email address is being protected from spambots. You need JavaScript enabled to view it.. Before doing so, you might want to read her article titled “ We can have our medicines and afford them too.”

Written by Jerry Ashton on Wednesday, 25 May 2022. Posted in Cartoon Corner, News

We Can Have Our Medicines and Afford Them Too 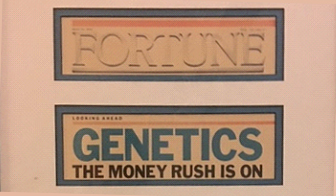 After earning a Ph.D. in human genetics in 1987, I chose to enter the nascent biotechnology industry rather than pursue conventional academic science. Venture capitalists in Cambridge, Mass, and elsewhere had caught wind of revolutionary genetic discoveries in university labs and academic medical centers. They saw a new gold rush opportunity.

The credo, then and now, is to bet big money on ten startup biotech companies, and if just one develops a high valuation in a buy out or IPO, presto! Instant millionaires! While saving patient lives too!

I joined a small army of scientists, engineers, patent attorneys, and young CEOs who set out to radically redefine human disease and treatment from the DNA on up. We knew that once we delineated the molecular pathway of any disease, we could prevent it with early detection and target treatment right at the root cause; ‘targeted therapeutics’ like the “Silver Bullet” for cancer, remember? All this transformation was enabled by loads of venture capital. Those were heady days. We intended to bring medicinal chemistry (pharmaceuticals) out of the dark ages. I contributed to early game-changing products and technological innovations. Some of the early companies and products are still impacting people’s lives today.

Most public life science companies back then and today have zero revenue. That’s right, companies trading on NASDAQ value their stocks based on intellectual property (patent applications) and potential revenue. These are high risk investments. It seems only right that those early investors in life-saving technologies would or should expect high returns on these investments. Some of the early investors became, and are still becoming, very rich from IPOs and acquisitions.

My colleagues and I asked, so what is wrong with that? In fact, as scientists, we felt that we should be well-rewarded for our role in inventing life-changing medicines, as some of us did.

This 35 year-old biotechnology funding model should no longer be exalted because it’s now working against our collective interests.

Despite a tsunami of molecular knowledge generated by academicians and industry researchers concerning human diseases, we have developed drugs for only 10 percent of the roughly 6500 human diseases we know about — and at increasingly stratospheric prices.

I attribute this to two significant and important facts:

We perverted the purpose of biotech companies by how we financed them. As is true in life, so it is in industry. You get the behavior you reward. And the process is addictive. It starts with a new company accepting high-cost early venture capital funds, followed by private equity and bankers doing IPOs and mergers and acquisitions, and finally the intoxicating experience of arriving in public markets. Everyone is financially rewarded. Except the patient.

The behaviors incentivized by what I call “high-cost capitalization” include:

In 2019, some colleagues and I said, “Wait! Are our labs in the business of forming companies so that we can ring the bell on Wall Street, or in the business of creating medicines that heal people? And if we want to work on any opportunity for improving lives such as repurposing old drugs for new disease targets (frowned upon) or any preventive or early detection test (no money in that), how could we ever get financed?”

COVID happened. We saw what our industry could do when it addressed an urgent need, as opposed to targeting a “market.”

We saw companies choosing to make low-profit vaccines, and doing it within a single year. Not for $3B! We saw how testing companies were immediately funded to create PCR and home tests to meet a healthcare need, not a marketing plan. They found ways to capitalize that effort — for the public good. We can now see that placing health above profit is achievable – and desirable.

We saw an effort to share all data and technical know-how globally. Government and private industry worked together to meet this emergency. COVID vaccines and therapeutics have remained private intellectual property, not placed in the public domain as were the polio vaccines in the 1950s. Nevertheless, with taxpayer support we now can have all the medicines America needs. And we can afford them too.

Is this socialized medicine?

If you are talking about the industry sector in which my company is located, then no. It’s “conscious capitalism.” Audacity Therapeutics does not need charity, nor government programs, nor social or public services. We believe that private industry can and should be delivering on the public’s need for medicine.

But we do need some rethinking to bring that about.

We need more biotech and pharma companies, like ours, that are organized to operate differently. Companies that are financially able to say “No Thanks!” to high-cost capital.

Audacity Therapeutics is so-named because we had the temerity to ask what if there were biomedical and pharmaceutical companies with a healthier primary purpose and duty that could:

From this ethical framework, we aim to prove that quality healthcare can be both profitable and affordable.