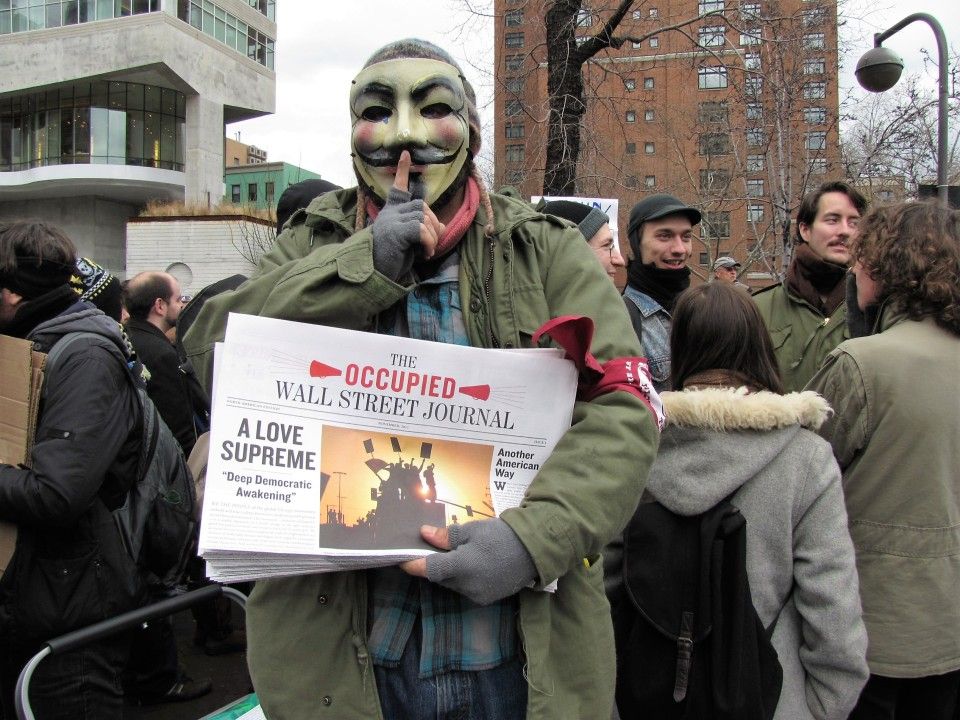 It had to happen in 2011. There had to be an alternative rag to main street newspapers which were doing a terrible and largely biased job of reporting on the Occupy phenomenon. But, so brazen a theft! To actually expropriate the moniker of the Robber Barons’ favorite mouthpiece and bend this new iteration towards financial news you would never find in it or elsewhere.

The WSJ itself recognized the importance of the movement and of this new publication, notably ignoring the likely trademark infringement. “Occupy Wall Street Has History on Its Side – Previous Protests Haven’t Lasted as Long – or Accomplished as Much,” headlined its October 20, 2011 issue.

Well, not exactly anonymous. Real Occupiers with real names were putting their journalist creds behind the launch of The Occupied Wall Street Journal. One of those people,  Priscilla Grim, aka grimwomyn, I managed to collar for a story (as well as a radio interview for an internet station operating at the time).

As I described in that radio piece, I first encountered Priscilla in September 2011 without knowing it when I picked up the maiden issue of the OWSJ at Zuccotti Park. At that time, she was a founding editor and Director and Project Manager of Occupied Media.

A week or so later when I did snag a personal meeting, I found her modest about her pioneering role as she largely credited others, such as Justine Tunney who founded the site http://occupywallst.org and co-founder of the journal, Jed Brandt.

There was nothing modest about the work performed by the OWSJ in getting out the word. There were the General Assemblies happening in Tompkins Square Park, the daily skirmishes with New York’s Finest, features on the people carrying signs, the “hard grounders” who slept on the Zuccotti concrete, fundraising and handling media inquiries. Oh yes, and the sharp-edged articles pounding away at Wall Street’s iniquities.

I’ll take some credit for being a tad omniscient when I then remarked that “only time will truly confirm (OWSJ’s) importance, but it deserves noting that many museum curators around the country are avidly collecting copies of the OWS Journal (among other such items such as signs and campaign buttons) in anticipation – years from now – of the historical relevance of the Occupy Movement and its major figures.”

Ten years forward, Occupiers are celebrating their movement and its historical – and current – relevance. As fate would have it, Priscilla is now a co-creator along with me and a handful of others of www.LetsRethinkThis.com where she serves as editor-in-chief of Our Newspaper.

No one knows how many people will physically show up at Occupy Wall Street this coming Friday, September 17, or recreate a few of the many Occupy encampments around the U.S. and the globe – at one point estimated at over 80 countries, 900 cities, and 600 communities.

We could be surprised. The organizers have always been known to be tight-lipped, but very effective, in their planning. You can be sure of this: those who show up this time will be seasoned, savvy and likely ready to even more vigorously tackle the wrongs that a decade later are yet to be righted.

This story originally appeared on LinkedIn