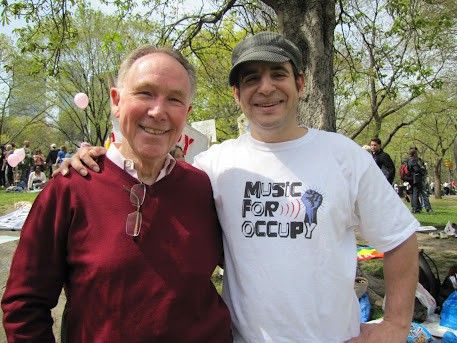 Patriotism and Protest – inexorably bound and oftentimes indistinguishable – have always had their say through music.

Whether it be the American Revolution (The Liberty Song), World War I (Over There – competing with I Didn’t Raise My Boy to be a Soldier), WWII (Boogie Woogie Bugle Boy and Praise the Lord and Pass the Ammunition), and the Vietnam War (Ballad of the Green Beret countered by War – What is it Good For).

Without needing to think about it, we carry in our thoughts the musical heritage created by fabled artists Pete Seeger, Jimi Hendrix, Buffy Saint-Marie, Joan Baez, Bob Dylan, Woodie Guthrie, Peter, Paul & Mary, Phil Ochs, Tom Paxton and so many more. Where are the songs for Occupy’s time in history? Who will write the words and music and poetry?

Those questions were answered emphatically with the debut on May 5, 2012, of “Occupy This Album- 99 Artists on 99 Tracks for the 99%,” the brainchild of executive producer Jason Samel which he created in collaboration with scores of musicians and industry professionals. Early on he connected with Maegan Howard of SoundTrack Studios in NYC and her friend, Alex Emanuel who then recruited entertainment attorney Shirley Menard. What a team; and they delivered.

The reviews rolled in. Mother Jones declared “…what the album lacks in musical cohesion it makes up in star power.” Jackson Browne.com quoted the Rolling Stone as saying, “Occupy Wall Street now has an A-List Soundtrack” and L Magazine declaring “This Occupy Wall Street Tribute Album has way too many amazing musicians on it.”

(My own personal choice in the four-disk set was and is Matt Pless playing “Something’s got to give.” His was the most authentic “folk” voice at Zuccotti Park and his was the lead song on the four-album set. Clearly to me, he was the “Woody Guthrie” of these times. Find more about Matt here.)

Want to know more about this album and its impact? I was fortunate enough to snag an interview with Jason and in this, he goes into details as to the album’s origin, its inspiration, and the work it took. Enjoy it here.

So, will the music for occupy be a funeral dirge or a true “Happy Birthday to You?” Show up at Zuccotti Park on 9/17/21 and find out.