Can “DeFi” Defy Predatory Lending? Adel Elmessiry Puts His PH.D and Energy Where His Heart Is

Improving the world. One hero at a time. 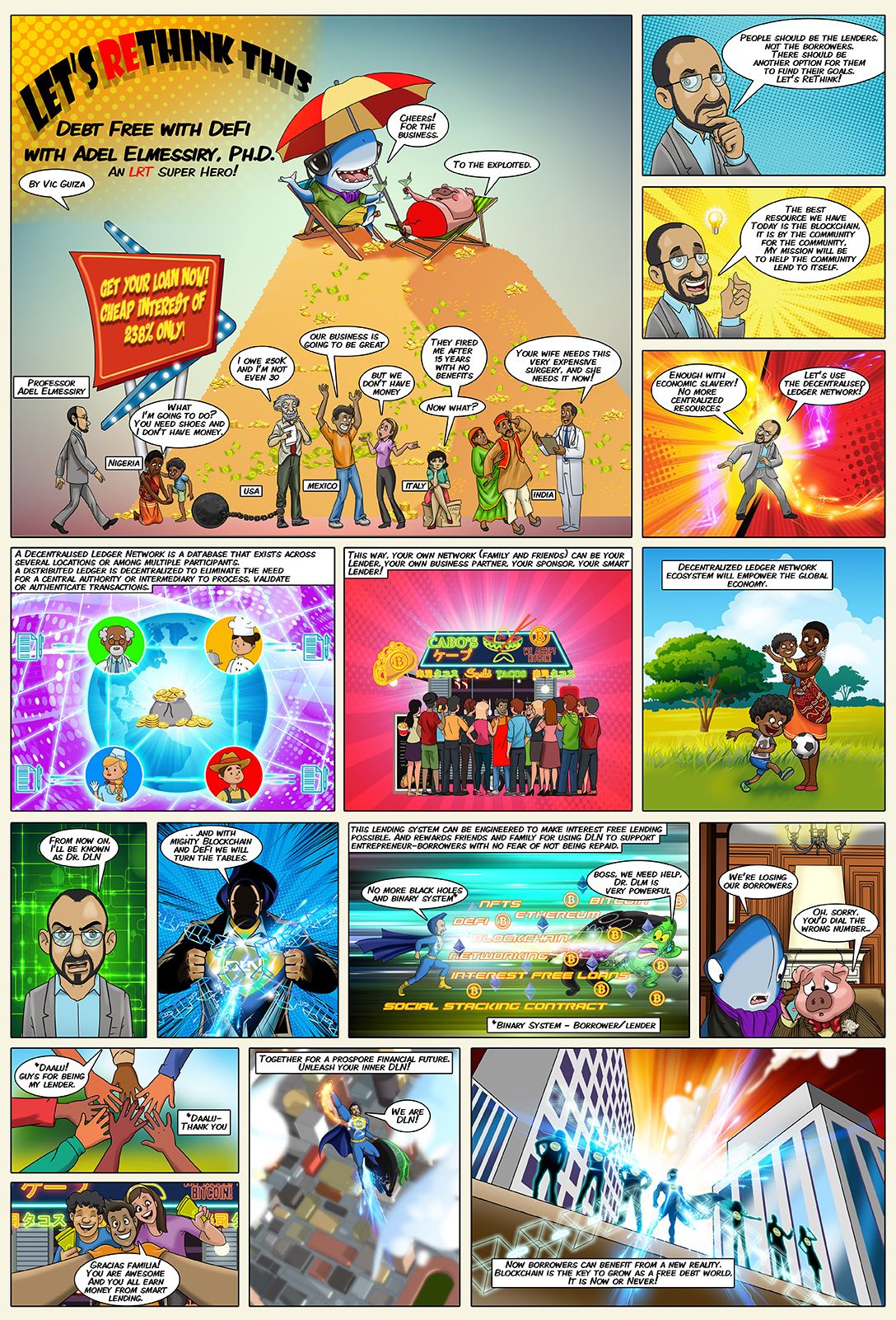 When Let’s Rethink This (LRT) was forming around our core work – which is to locate the changemakers of this world (searchlight), put their talents and solutions on full display (spotlight) and then see to it that their important contributions would attract and engage investors and partners (ignite), we weren’t alert enough to notice that one such rethinker was already one of LRT’s co-creators.

Actually, we should have guessed from his modest pronouncement on LinkedIn: “…to build the next financial technology ecosystem that will empower the global economy” that he was up to some good. We just didn’t know how good.

Translated through his DLN (Distributed Lending Network) design, Adel’s approach to interest-free microfinancing has the potential to rewrite the rules of that industry. The secret sauce – other than making friends-and-family loan risk free – is his application of blockchain.

It is quite clear that people in the lower socio-economic rung throughout the world are carrying debt. It is also clear that in all too many cases they lack resources to pay even the interest accruing. Which of course, calls for another loan. (The accompanying cartoon shows the tragic cycle entrapping our world’s poor…to the delight of the “pigs and sharks.”)

“Dr. DLN’s” super solution: a fintech ecosystem secured by blockchain in which lenders are family and friends assured of not incurring a loss. More than that – they would be rewarded.

LRT approached Adel with these questions:

LRT: When did you “rethink” micro-financing, and how did this come about?

DLN: When the pandemic started back in March, 2020, I started thinking of the costs and inadequacies of what is presently in place. By the summer, I had the basic structure designed and began circulating my ideas.

LRT: What qualifies you to bring about this change?

DLN: I have a Ph.D. in Computer Science, have authored award-winning papers, have a proven track record in starting successful companies and have a deep knowledge of blockchain.

LRT: What exactly is a Distributed Lender Network and what role does blockchain have in this?

DLN is a framework that is now being deployed to develop a wholly inclusive ecosystem that provides Microfinance Institutions with new tools to scale and meet more of the needs in the communities they serve. Importantly, in a jurisdiction compliant manner. DLN utilizes the power of blockchain smart contracts to provide a social stacking smart contract that unifies community resources within and for the community.

LRT: How is the lender indemnified from loss?

Because the social stacking smart contract organizes the lending process among the individual and their friends and family, it leverages the social ties to hold each party responsible. In micro lending, the repayment rate is shown to be 98%.

LRT How is the lender rewarded?

The main innovation is that DLN invests the otherwise dormant collateral, in blockchain based decentralized finance (DeFi), which generates enough yield allowing all participating parties to be rewarded.

LRT: Why is a Distributed Lender Network needed?

DLN: There are so many factors, not the least being the fact these countries are facing a debt crisis. The IMF estimates low-and-middle income countries have more than doubled their debt between 2008 and 2018 from $3.4 billion to $7.8 billion. Debt servicing in French-speaking countries (largely in Africa) have a debt service burden of 40% of their budget revenues. Even then, these loans seldom reach to the bottom of the pyramid where it is needed

“When current forms of direct micro-lending is used, interest comes into play as well and makes the payback longer and more painful,” Adel says, adding,” This is NOT sustainable development.”

And then, there is the COVID-19 factor. According to a report in late 2020 by UN women, 96 million people will be pushed into extreme poverty by 2021 – 47 million of them women and girls. Adel centers his attention on their plight.

“It is particularly important for us to provide support for women-owned and led businesses who have limited access to subsidized and state-backed loans,” Adel says. “When you add the interest factor you are adding another hurdle…” his voice trails off.

LRT: Who would find your form of distributed lending by way of blockchain to be objectionable?

LRT: Who are your allies?

LRT: What is your intended outcome?

DLN: To elevate the global economy to make it top-to-bottom inclusive with universal access – especially for those brave and capable people at the edges who have yet to benefit from an interest-free lending system. The what-makes-this-different edge that we feature in a distributed ledger system that only blockchain can provide.

He takes a deep breath. “The deference between light and leaser is that the later photons are in sync and in phase. Ergo, the power. Following that analogy, DLN is the synching of a community’s financial photons. Light shows us the poverty. “Synched light will burn it away.”