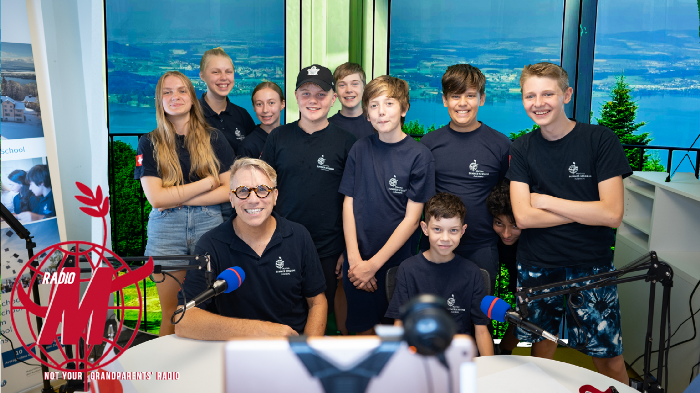 Cary Harrison, the highly regarded social commentator for public radio station KPFK-fm in Los Angeles, returned this summer to his boarding school roots — Institut Montana Zugerberg — to introduce a fresh crop of students into the mystery and magic of … radio? Well, somewhat.

This is not a terrestrial radio station built along analog transmissions with giant towers, licensing, and massive staffing. Rather, it is a streaming station called “Radio M” after its Institut home in the Swiss mountains and is staffed by students ranging in age from 10–16 hailing from a literal United Nations of 34 countries. As its creator and instructor and at the invitation of the Institut’s accomplished leadership, Cary had to carefully craft and adapt his years of real-world thinking to their generational interests.

This effort has now materialized into a combo video/radio station and the first of its kind as being international. The voices heard range from students from the US to Russia and from Ukraine to Saudi Arabia — an astounding blend of the of youth communicating intelligently about matters that affect them.

Harrison explains, “It uniquely benefits from being politically agnostic and without patriotic bent. I like to think of it as ‘Hotel Earth,’ where everyone gets a room.”

Or, as the student’s motto makes clear: “Not your grandparent’s radio.”

The mechanics and the passion

This is a two-week course in leadership and Media which will result in an ongoing working station to showcase independent young student voices without undue censorship or corporate bias in the safety of a neutral country. The course contains basic journalism, media training, technical aspects, audio and video production, social media, and accountability.

“It’s a groundbreaking undertaking and this forward-thinking school will be the first to broadcast the offerings of the finest young minds assembled in one place,” Harrison says. “Is it about saving the world? That is their goal,” Cary affirms. “A fresh perspective untainted by cynicism or political bent as these exceptional students rethink all the obstacles we currently face.”

A final pilot will be broadcast on Los Angeles Public radio (KPFK 90.7FM) and a dozen sister affiliates around the nation, plus several affiliated stations in Europe.