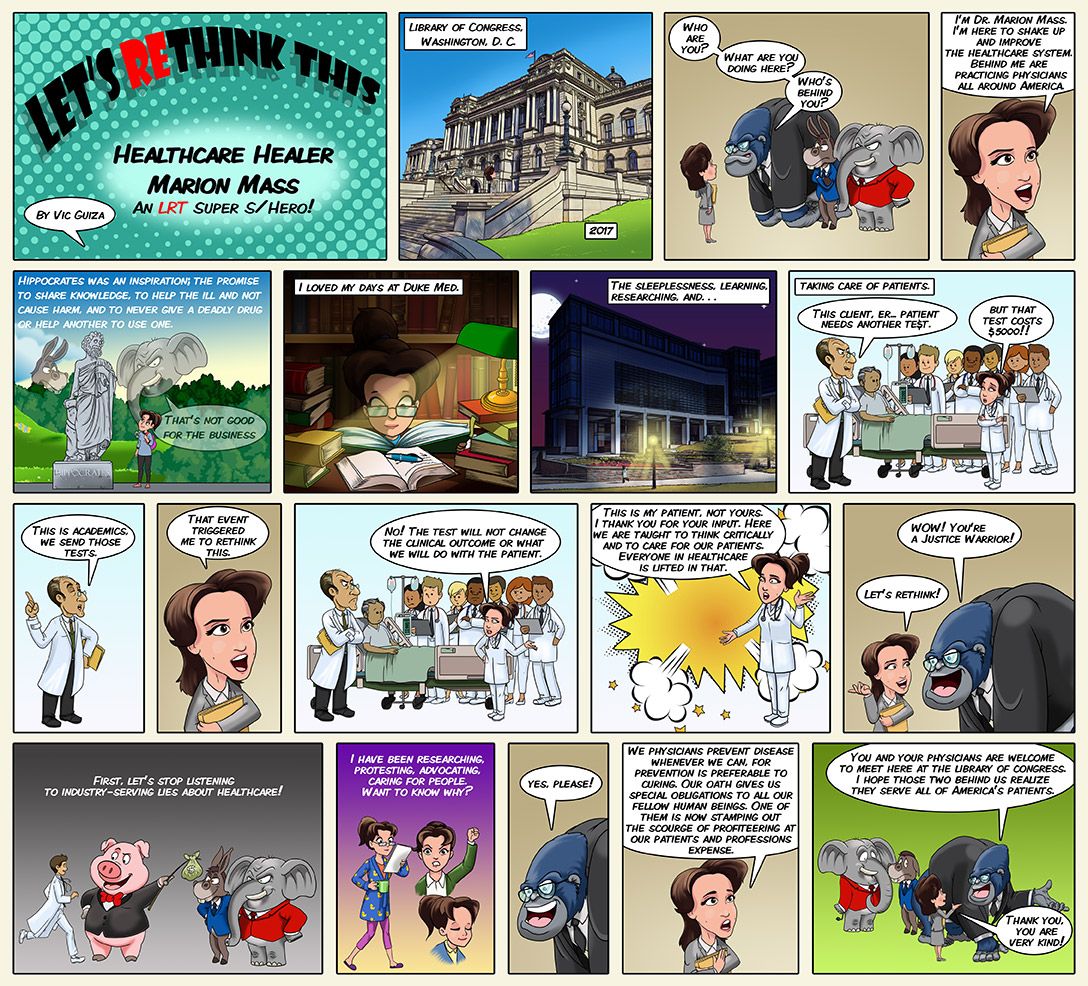 Until Let’s Rethink This came along, one of the most overlooked ways of making the public both aware, educated and ready to take action on a social problem is to turn the problem into a cartoon and someone solving that problem into a “S/Hero.”

Not to simplify, but to “pic-tify.” You know, the usual picture-is-a-thousand-words idea. This is the approach we adopted in featuring Dr. Marion Mass as our superhero #2 in a series that we will be publishing. (The first hero: Clayton Banks of Silicon Harlem.)

Given the egregious faults found within America’s dysfunctional medical system, and the attention that Dr. Mass has attracted as a physician-advocate in her rethinking of America’s healthcare, we couldn’t have found a better (almost militant) candidate.

Dr. Mass is co-founder and Executive VP of The Practicing Physicians of America, an organization that advocates for patients by – what else – advocating for the profession of medicine. As they describe themselves: “We advocate that physicians (be able to) practice medicine that is in the best interest of their patients and not for the benefit of special interest groups that have taken over medicine.”

Hmmm, now who could those “usual suspects” be?

Easy enough to tick off on the fingers of one hand: Big Pharma, Big Hospitals, Big Insurance, Big Lobbyists and Big Business.

Almost automatically, these groups fall into the “too big to fail” category – but not in the eyes of Dr. Mass and the physician/supporters she has accumulated along the way.

Dr. Mass is a pediatrician in the Philadelphia region where she practiced in hospital Emergency Rooms and Urgent Care settings. A graduate of Duke University Medical School and trained in pediatrics at Northwest Memorial Hospital in Chicago, she has been writing about life inside medicine and has been published in the WSJ, Washington Times, and the Philadelphia Inquirer as well as guested on radio shows and BBC broadcasts.

Oh yes, and if the legislators and lawmakers are brave enough to learn from her, she advises lawmakers at the state and national level.

The Artist and “Cartooning”

Vic Guiza, recently added to the LRT co-creation team, has his own credentials which comprise 30+ years of experience in rendering graphic novels/images that catch the eye and attention in a delightful fashion.

We can start with Disney, The Simpsons (Bongo Comics), Marvel Comics / Upper Deck and the Teenage Mutant Ninja Turtles. Not to mention the different awards earned for his work as a childrens’ books illustrator and that Vic holds a Master of Product Arts from Disney Consumer Products.

Everyone knows the basic plot of a comic or graphic novel. There is a s/hero, a wrong that needs to be righted, and an outcome that only someone with superpowers could possibly bring about.

That’s where LRT introduces the super-artist to the super-candidate – to take on the “Too Big To Battle” forces that are costing our country its very blood and treasure.

That’s where the magic of art and the education born of wisdom is put to its destined purpose: change-making.

And, it is you, the reader, who are the ones to make this happen. If making a difference is embedded in your genes, you arrived at the right place. Join us, and join in.