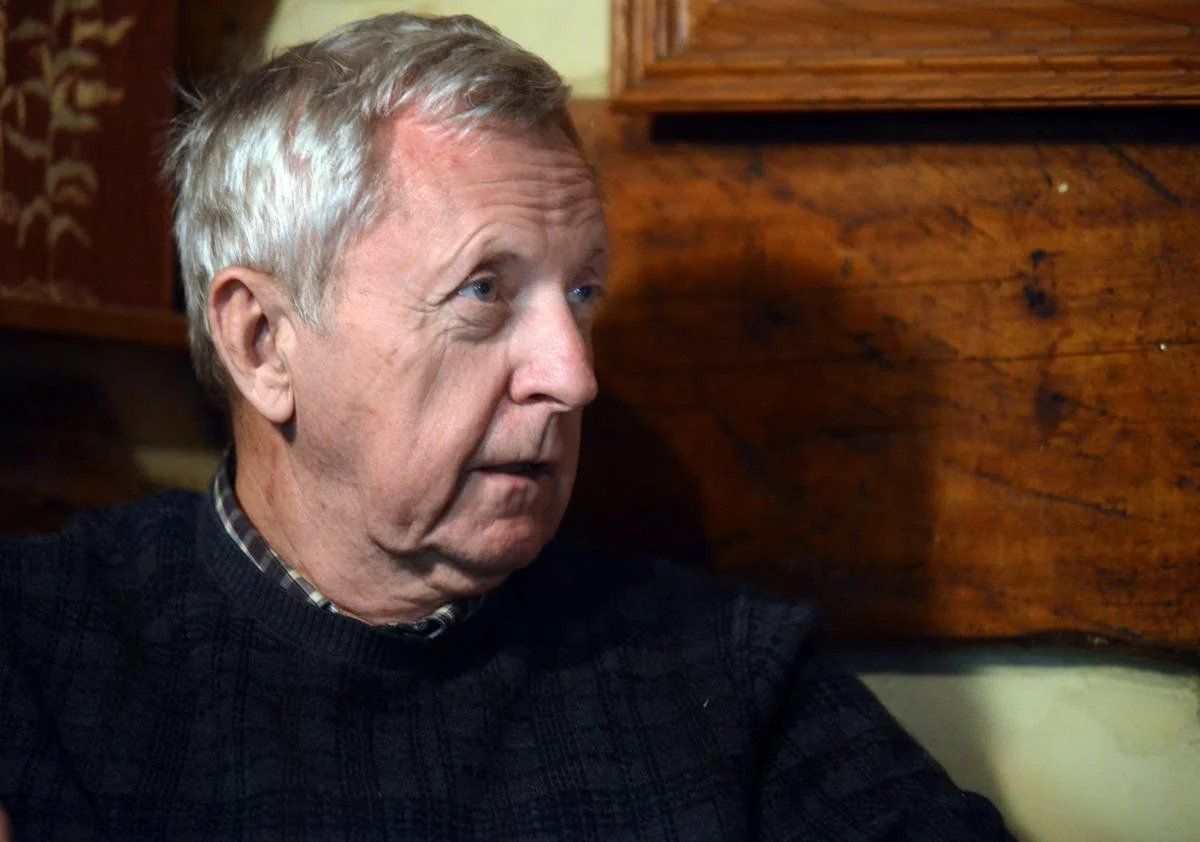 Vietnam Veteran Emmitt Yeary tallks about his time in the service and the founding of the Veteran's Park in Abingdon.
DAVID CRIGGER/BHC

ABINGDON, Va. — Emmitt Yeary was a captain in the Army’s Judge Advocate General’s Corps, stationed in Vietnam, when he received a letter postmarked Abingdon from a distraught mother seeking information about how her only son — Lt. Billy Webb — died the previous year.

Yeary grew up in Wise County, but spent three months in Abingdon during the summer of 1966 before reporting for duty. He didn’t know the Webb family. But Billy was killed near where Yeary was stationed and the young attorney was both curious and touched by the heartfelt plea to get beyond Army platitudes that her son “died bravely serving his country.”

So Yeary ventured to the site of the attack and read the report of the incident.

Webb and another soldier had gone to reconnoiter a hill as a possible location for a small quartermaster base. When they returned the next day, Viet Cong soldiers shot them in the legs so they couldn’t flee, walked up and executed them, Yeary said.

“In the report it mentioned street signs. It was a little dirt road out in front of the Quonset hut and there was a sign that said Webb Avenue and the next row over was another sign for the sergeant who was also killed,” Yeary said. “His comrades didn’t want him to be forgotten. I took pictures of the signs, I took a picture of the hill and I wrote her back and told her some of what happened and that gave her a sense of closure.”

More than 30 years later, Webb’s story again inspired Yeary — and an entire town — to pay homage to all who serve.

“I came back to Abingdon, looked around and didn’t see any signs like I’d seen there; nothing to honor Billy Webb. I looked around at other counties. Wise County and Russell County and Smyth County all surrounding here had something to honor soldiers. Tennessee was very patriotic,” Yeary said. “It struck me that here in Abingdon were things honoring Civil War generals and governors; nothing for the common soldiers, who are anything but common.”

“That was in the back of my mind for several years and one day the Iraq War started and the yellow ribbon campaign was going on,” he said of a longstanding patriotic trend of attaching yellow ribbons in public view to honor service members.

Yeary and others began buying yellow ribbons and placing them on street lights and businesses in Abingdon to show support for U.S. forces, but he ran into some governmental red tape after asking to hang them on the sign at the town’s library. After some delays, he ultimately received permission from the county’s Board of Supervisors

“When they said go ahead, it just came to me; we don’t need to stop at the ribbons. We need to have a real monument supporting the troops and honoring the military because we didn’t have anything like that in the county,” Yeary said.

That began another series of phone calls culminating with Yeary’s impassioned speech to Town Council about the heretofore ignored sacrifices.

The result is Veteran’s Memorial Park, a 13-acre hillside off Cummings Street near Interstate 81’s Exit 17 dedicated on Veteran’s Day 2003. Yeary and others captured that hill, adorning it since with flags, plaques honoring service members from different conflicts and a walking trail. There is a permanent yellow ribbon inscribed “Until they’re home again” and a liberty peace tree that includes a replica of the peace dove that appears at George Washington’s Mount Vernon home.

“Since that time, we wanted to do something more. It’s a place to honor the veterans, but it’s also a place of inspiration,” Yeary said. “It’s become an educational park. We have a theme each Memorial Day and Veteran’s Day and honor World War II, Vietnam, Korea and this year’s will be about the Civil War.”

Proud of his own father Ray’s World War II service in the Marine Corps, Yeary intended to fol-low in his footsteps and enlist after high school. While Ray Yeary survived the horrors of battle, he was killed shortly after returning home to the mountains, while riding his motorcycle. His death had a profound impact on his son.

To this day, Emmitt Yeary grows emotional retelling the story of how the recruiter — a man who served alongside his father in combat — ripped up the paperwork.

“He said, ‘I want you to go to college first. I want you to come in as an officer. Don’t come in as a grunt like your dad and me. Then come back to see me.’ So I took his advice,” Yeary said. “I went to Clinch Valley College, the University of Virginia and the Washington-Lee University Law School. That was about the time the Vietnam War was heating up.”

He received a draft notice during his final weeks of law school in April 1967.

“I was lucky. I applied for a commission and received one of only 12 commissions for the JAG Corps,” he said. “When I was in JAG school, they were asking for volunteers for Vietnam. I think I was the only one in my class who volunteered. I guess I just remembered my father and others like him. I needed to do something to take some chance or risk that he and so many others had taken.”

Prior to deployment that fall, he also learned how to drive tanks and completed paratrooper jump school with the 82nd Airborne Division in Fort Bragg, North Carolina.

Rather than combat, Yeary was assigned to the front lines of investigating and defending soldiers accused of crimes during wartime. He handled a wide range of cases ranging from a major black market conspiracy, to murder, theft and assaults on officers.

“Just to gather evidence and interview witnesses, you don’t just get in a car and drive to Bristol,” Yeary said. “My philosophy of practicing law is know the law, know the facts and go to the scene. I got to do a lot of traveling around the country with a briefcase in one hand and a rifle in the other.”

Traveling by Jeep meant putting sandbags in the vehicle’s floorboards in case they ran over a landmine.

“I’d be fair and be driver one way and shotgun one way — because you have a better chance if you hit a mine with more sandbags. You could put more on the passenger side,” he recalled. “Travel within a few miles of the base was OK, but there were some places you wouldn’t go without a convoy. Other times, if you get far from your base, you’d go to a depot where a helicopter or plane would come in. You might be there 30 minutes or you might be there for a day.”

He was fired upon once while in Saigon at the start of the Tet Offensive — a coordinated series of Viet Cong attacks that began in January 1968.
“I was in a Jeep, a sergeant and I. It was at night and some machine gun fire came across the front. We went forward between the bursts because you couldn’t turn the headlights on,” Yeary said. “It was a pretty intense time. Everything was calm. Once a buddy and I were walking to the chow hall and we heard this boom and saw this mushroom cloud that looked like an atomic bomb. They had blown up our ammo dump and we hit the ditch at that point.”

One vivid memory lingers to this day.

“One of the duties I had was to go to the morgue. That was the first time I’d really seen such a mass of what the war was. I can still visualize those bodies stacked up like cord wood and just the stench,” Yeary said. “There was one sergeant working the morgue. He’d been there six months and been in the mortuary unit for 12 years. He said, ‘Sir, please help. I can’t get a transfer and I’m going to go insane,’ because of what he had to see on a daily basis. He couldn’t get used to that.”

Once Yeary returned stateside, he was stationed at The Presidio, a once-major military base in San Francisco. It was there he was involved in the longest series of legal cases in U.S. military history.

A group of 26 soldiers being held in the stockade protested the shooting death of another prisoner by sitting in a circle singing “We shall overcome,” rather than follow orders to assemble. Officials “overreacted,” Yeary said, charging the men with mutiny — an offense punishable by death.

“The anti-war protests were going on at that time and it really gave the war protesters some-thing to protest. It went on for six or seven months,” Yeary said. “I was originally assigned to represent all 26 of them, but wound up representing seven. It made national television, Newsweek and several of the magazines. The secretary of the Army came out. I told him I thought it was an overreaction and there were some procedural things they had not followed.”

Yeary and his co-counsel, Brendan Sullivan, successfully got the charges reduced via a “vigorous defense” and ultimately prompted the military to change some regulations about how cases are prosecuted.

Sullivan has since been involved in a number of other high-profile cases, including the defense of Col. Oliver North, the former deputy director of the National Security Council who was convicted in the Iran-Contra case and later cleared of all charges. The two remain friends.

Yeary downplays his own military service, suggesting that any attention should instead go to those who fought — and too often died — in battle. Yet his time in Vietnam, some 9,000 miles from home, allowed him to comfort a grieving mother who lost her only son and led to a tangible way for a community to permanently recognize the sacrifices of so many.